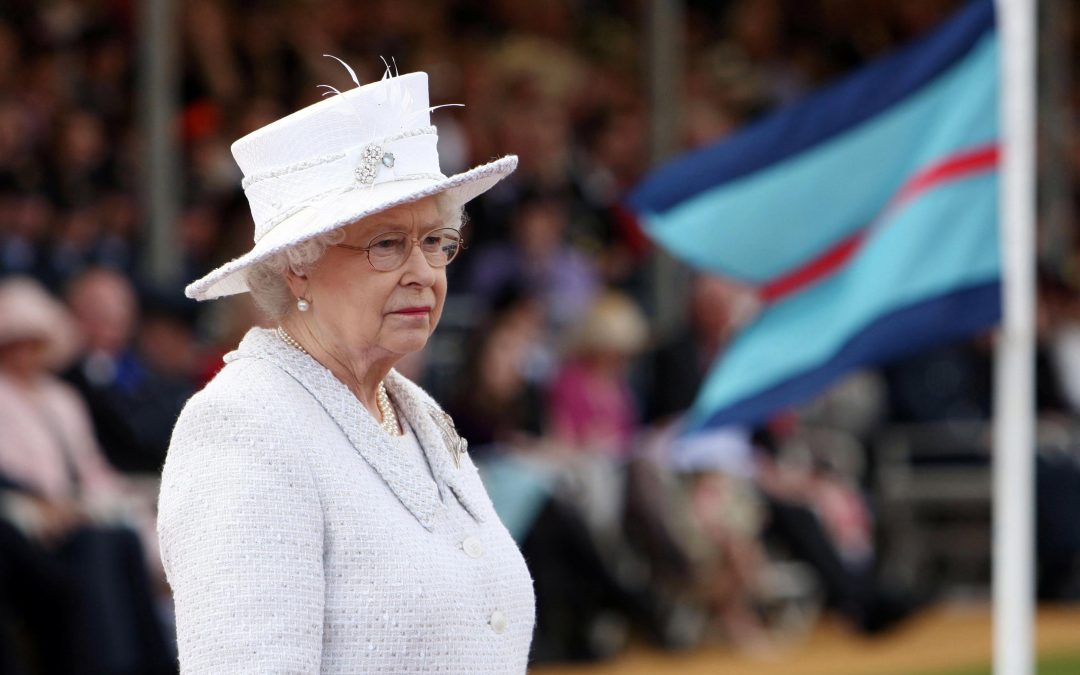 The cost of living crisis has returned to the United Kingdom. Inflation will have reached 2.9% in the month of August and will again surpass wage growth. According to the Bank of England, the pound sterling’s falling value since the Brexit referendum explains this phenomenon. This has lead to an increase in the cost of imports, especially energy. Wage growth, up 2.1% this year, has not followed. In fact, real wages account for inflation and fell by 0.4% during the three months prior to July 2017. At the same time, the 4.3% unemployment rate is currently at its lowest level in 42 years, a disillusion for those observing the strength of the UK recovery, as wage growth remains weak. You may not be aware, but it has now been more than 10 years since the financial crisis began; and for nine years we have been seeing a rise in stock markets in most major sectors. Officially, the economy has supposedly recovered. The unemployment rate is below its long-term trend level, at around 5%. Growth has been positive for many years, despite significant obstacles to overcome, a result of fiscal consolidation. Inflation has increased. However, there is a downside that may explain the weaker real wage growth. For almost the entire decade, gains in productivity, which have led to increases in the cost of living in the United Kingdom since the beginning of the industrial revolution, have remained at a standstill, at least according to official data. Since the crisis, most of this increase in the GDP comes from the “work factor”. In fact, people are working more (often due to high net migration), working longer, and many people have returned to the workforce. Weak growth in worker productivity means that ordinary Brits do not truly enjoy any benefits from economic recovery, especially in terms of wage increases. Workers fear that the return of high inflation will negatively impact their incomes. But do we have all the explanations? Our research has shown that the G7 countries consider slowing productivity differently than in the United Kingdom. Yet, the country’s performance should be added to the list of concerns. In fact, the United Kingdom is struggling because of the unique economic conflicts that occurred after the crisis. 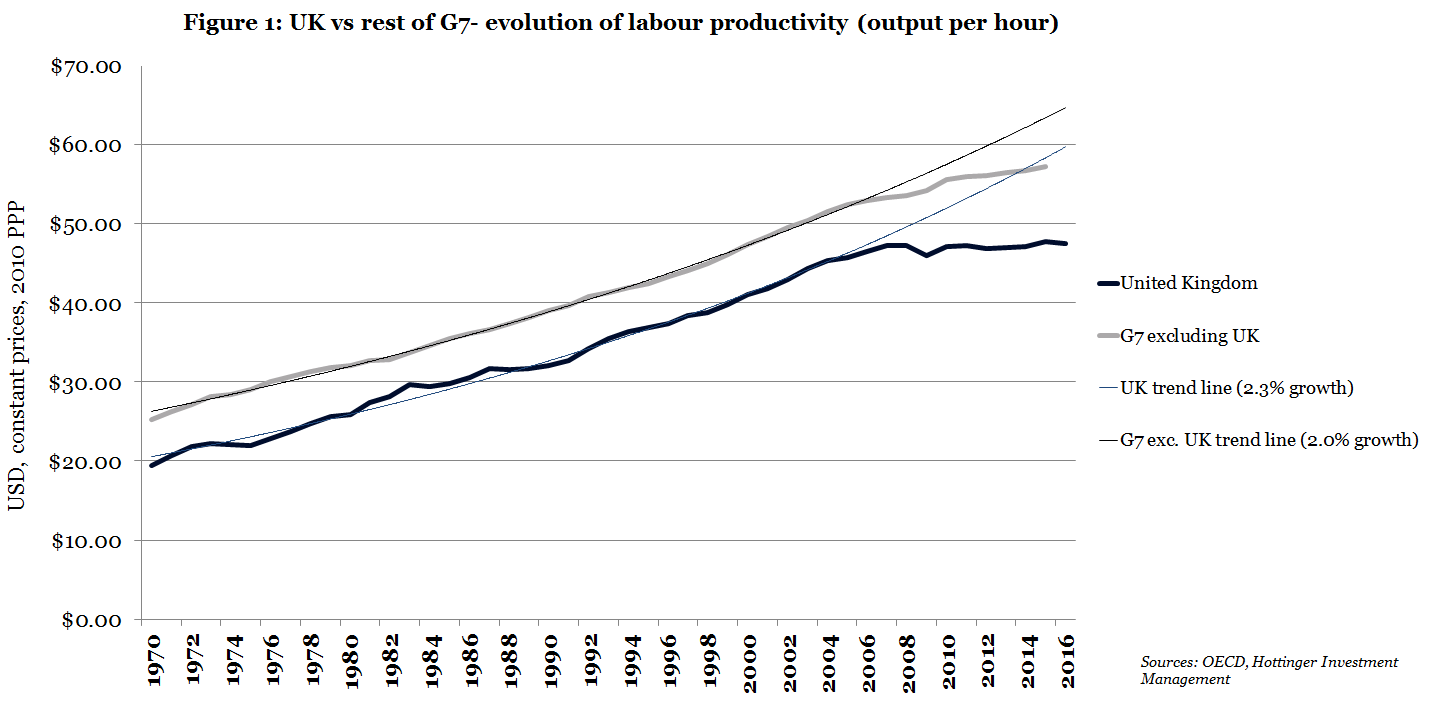 The graph in image 1 shows how labour productivity has evolved. It was calculated based on the yield per capita, and we can see that between 1970 and 2008 it grew faster in the UK compared to the other G7 member countries. The curve rises slowly in 1970, but then British productivity grew by 2.3% per year on average whereas productivity in the other countries, technology leaders like the United States and Germany, grew by 2% (weighted calculation by share of total GDP). Nevertheless, in 2008, productivity deviated from the trend curve in all the advanced economies, and the strongest deviation occurred in the UK. We should expect such a result at the beginning of each recession, as weak demand leads to labour and capital “reserve capacity”. But this phenomenon should not endure, because after each recession since 1970, productivity rapidly rose again. We can see this impact in images 2 and 3, where the yield per hour deviates from the UK’s trend curve unlike that of the global technology leader, the United States, and compared to the other G7 countries.

The curve for the UK and the G7 countries continues to deviate from its trend rates, but at different degrees. Over the past 5 years, productivity in the United States also slowed down, only to return to its long-term trend level after a decade of rapid growth. However, if the country continues to perform worse than the official figures, as it seems to be doing, it will also slip under the pre-2008 trend curve in the years to come. The United Kingdom seems to be one of the worst students. Its productivity (and therefore real wages) is 20% below recent trends, while the other countries are below only by 10%. We will talk about the UK’s problems later in this article.

Within the G7 countries, slowing productivity can be explained by many factors: demand remains too weak in all industrial sectors; the trend rate prior to the crisis fell within these 7 countries because of structural changes in the economy; the pressure to reduce their debt during the crisis discouraged companies from investing in products and processes that improve productivity; or, statisticians have not noted any gains in productivity. Without taking into account the fear-based politics espoused in Europe in 2015/2016, deflation is not a major problem in most of these 7 countries and it cannot be explained by a trend that spans a decade. Nonetheless, fiscal measures should have been solid and well thought-out to accelerate recovery and to overcome the productivity challenges we currently face. The long-term trend curve helped stimulate American growth as well as that of its trading partners for more than 150 years. Although we are not convinced that it should be completely scaled down to meet current trends, we believe that a moderate deterioration of this growth trend is a foreseeable option. Indeed, we are facing a reduction in mainstream technology production, like electrical energy and mass production, as well as weak service sector growth in all the G7 economies. Maybe the financial crisis simply brought these fundamental changes to light. The financial crisis and debt reduction have likely increased corporate risk aversion and discouraged them from investing in new technologies (especially nanotechnologies and biotechnologies), which promise to bring about radical change in industrial activity. A reduced growth trend rate also follows, at least in the short term, within the G7 countries. This means that lower growth can be compatible with full employment. The fourth reason (hidden productivity gains) may explain a significant proportion of the deficit in the 7 countries and in the United Kingdom. The information technology sector’s emergence and growth has concealed the real productivity gains achieved since 2008. For example, smartphones now replace many other devices like cameras, GPS systems, mp3 players and other game consoles, and to a certain extent, they have also entirely taken the place of portable computers. Yet their price has fallen at the same time. Product consolidation in the consumer electronics sector and new technologies means that when we formally measure the GDP, we underestimate the true level of return, adjusted for quality. And in some ways, this explains why productivity appears low when compared to the level of employment. Furthermore, the GDP figures do not include non-monetary operations, like content generated on the social networks or services provided by free applications that strengthen the “collaborative economy”. To return to Britain’s economic challenges, other things come into play, as pointed out by the Bank of England’s Monetary Analysis Directorate in an article published in 2014. It mentions that low interest rates prompted the banks to be more tolerant of corporate debt, which in normal times, would have resulted in likely bankruptcy. Moreover, tension in the credit market has kept resources from supporting new and profitable opportunities, and a sustained decline in real wages based on the price of capital discouraged companies from investing in job creation. Although worldwide growth in productivity is poor, this challenge seems especially glaring in the United Kingdom. Our research has shown that the country has suffered from a decade of a loss in productivity, but runs at almost full speed, contrary to what the pre-crisis trend curve suggests. As a result, the country faces a period of “stagflation” – weak growth and high inflation – which in the long run will cause issues for the Bank of England, whose objective is to maintain inflation at 2%. As inflation increases, real interest rates fall, pound sterling weakens and the UK economy could begin to flourish. The bank will then have no choice but to raise the base rates. However, efforts to improve productivity could have opposite effects than expected, as there could be adverse macroeconomic outcomes if the markets are unable to withstand the higher interest rates. This is all only a short-term vision. Nevertheless, if what the technologists assert is true, we are truly about to enter a new industrial revolution, promising great progress in productivity and living conditions. In this case, the long-term prospects for Britain and the G7 countries may obviously not be as bleak as it seems.